The optical network analyzer (ONA) is usually used to test the overall circuit performances under testing mode. It also could export the analysis results.

Following is an example of how to export the analysis data from an optical network analyzer, please see also the example file ONA.icp 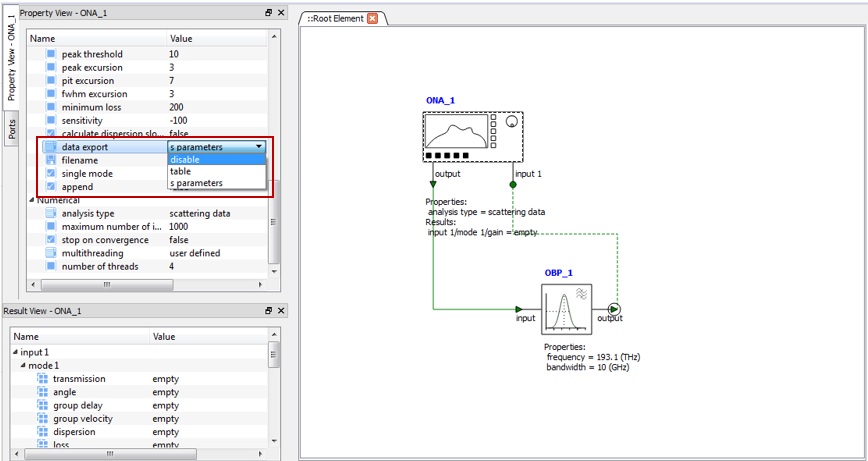 Note that the export data format could be s-parameter or table. In this example, the data exported is the measurements for the optical band-pass filter. Please see the data files ona_s_parameter and ona_table for more information, following is a glance for the two data files.

After the simulation is run, a number of measurements will be generated. To view the results, right click on the result entry and send it to visualize.

Multi-source simulations with the ONA

INTERCONNECT simulations of circuits with active elements can be done using an ONA in both frequency- and time-domain. In both cases, the simulation setup requires the presence of additional sources (mostly electrical and DC). Naturally, whenever a simulation is run with an ONA along with some other source, the sample rate is not going to be the same between the sources by default. By default, all sources except the ONA gets their sample rate from the Root Element. Only the ONA uses its own sample rate which is defined as the ‘frequency range’. To solve this problem, since INTERCONNECT release 2019b, we added the feature to make the sample rate consistent between the ONA and other sources automatically when both of them appear in the same circuit.

After running the simulation, the sample rate will be restored to the electrical source, with the following warning message: